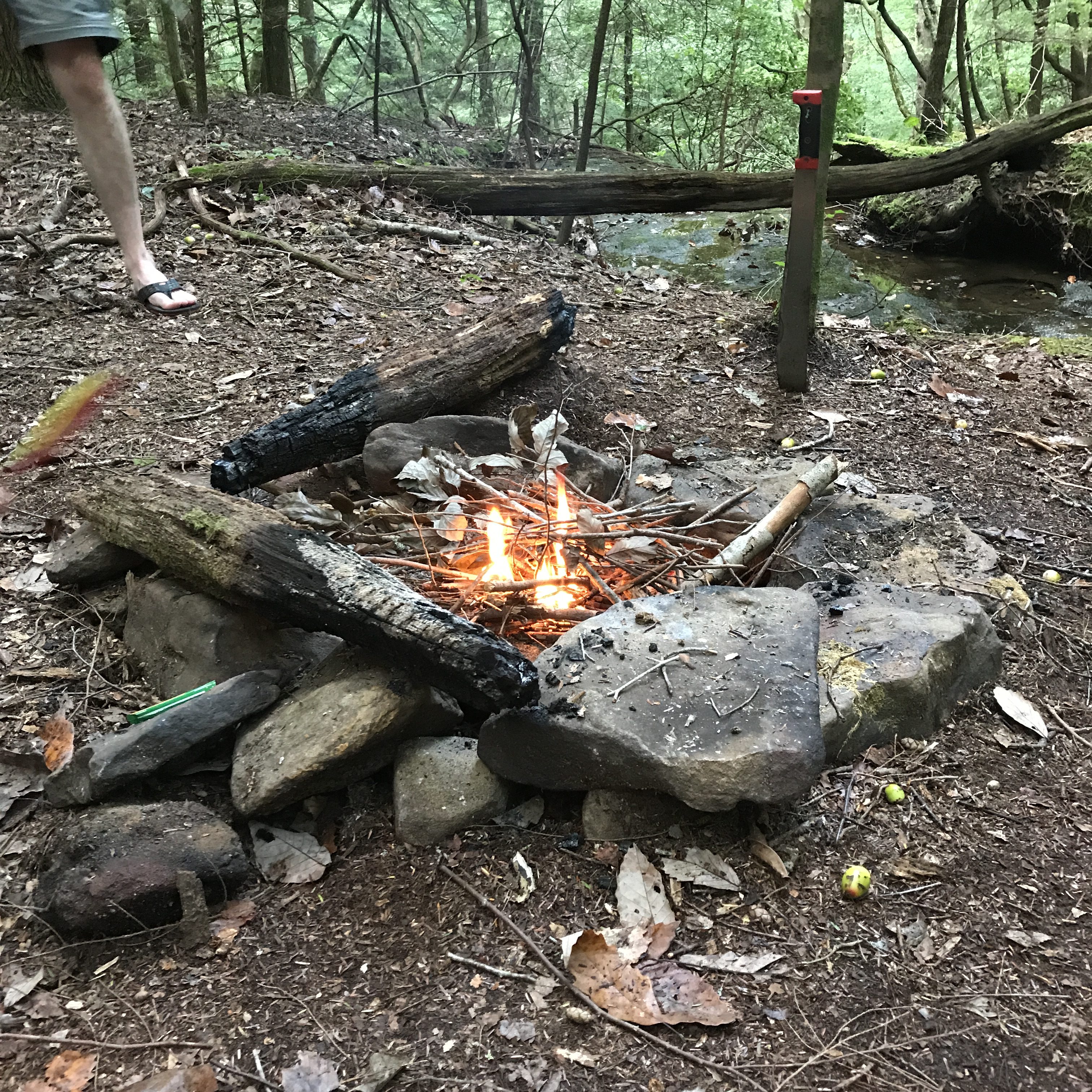 So, I left you last time standing atop The Hill, vowing to conquer it one day with a full pack. I really mean that, too. and have taken steps to facilitate a return attack next year. But we went on to camp from there over a few more streams and finally around the bend to where the tent got pitched and the fire built.

My partners, Rambo and Bucko,   wouldn’t let me do much. They have a process, they said. They put up the tent first, then built a fire in a fire-pit that I believe was created on a past expedition. Apparently, this spot where the camp was situated is not often traveled by others, but my fellas frequent it alot. But then again, most hikers wouldn’t dream of scaling such heights as we did.

At any rate, we were right by the stream and it exited our area over a waterfall. The sound of splashy water was very comforting. The trees were gorgeous and the whole effect perfect as the sun began to slink its way down the sky. I could see the charm of this spot, even if the HILL was my nemesis.

After they got the fire going, and we began to settle in, I started thinking about how to alleviate myself of all the fluids they had made me drink. Yes, what goes in most definitely has to come out.

Well, being the modest woman that I am, I hunted a spot. I went through the trees lining a ledge above the tent area. First effort, not too bad. Then, as I tramped a bit higher, I found out that woods are the homeland to some mighty critters. Yes, not my best plan ever, for sure.

You see, SPIDERS build WEBS all through the trees in the woods. And if I haven’t mentioned it before, I have serious ARACHNOPHOBIA.  Spiders and I are not friends. Have never been friends. Will never be friends.

I screamed blue blazes as I tried to extricate myself from the web I’d blundered into. (Riotous laughter from the fellas who never once mentioned this woody problem to me) After that, I was a lot less modest, and used the cover of night to hide my business instead of trees. (side note: good thing, too – the webs were MASSIVE as I discovered looking through them in the bright sunlight the next day! – Seriously, can you imagine the SIZE of the spider that builds THAT???)

came. Darby was more interested in our freeze-dried food than her dog food and we ended up feeding her a bit of everything we had. Oh, it was all fun and games up to that point. Then came the time when I wanted pajamas and slippers instead of wet clothes and hiking boots.

I went over to my pack hanging on a tree branch and pulled out all the things I needed. Darby hung out around the tent, expecting me to go inside soon, and I think she was ready for bed. I bent over to undo the zipper to the tent and a very extremely loud buzzing flew past. I asked the fellas what that was, and they were unsure but whatever it was it had buzzed over them, too.

I hollered to the fellas that it was a hornet.

I said, “It isn’t a bite I’m worried about.” And began swinging at this hornet for all I am worth.

Well, you know what happened.

He stung me! Right on the top of my ear.

My son, the insect smartie pants, thinks I am having fun in the tent and videotapes it. Right up until I begin screaming. It’s a fun video. Maybe one day I will show it to you.

At any rate, I am now STINGER. That’s my trail name. Sigh. Next time I will take you on a day hike to a very old 1800s cemetary. Perfect for Halloween thoughts!

Posted in:
Tags: hiking trip, trail
/ 0 Comments
Subscribe to the Zanies See the sidebar to sign up!
+