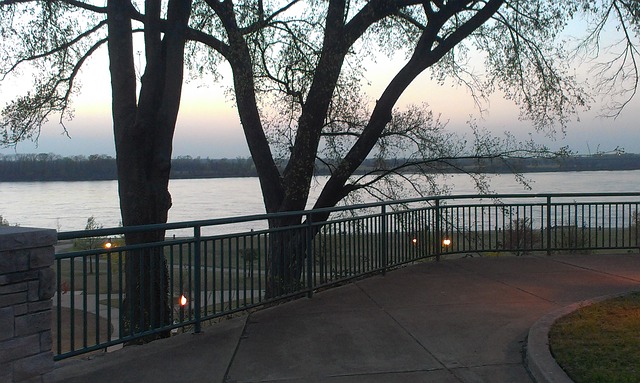 I have been a lifelong Memphian. I always jokingly say, Memphis born, Memphis bred, when I die I’ll be Memphis dead, but sometimes I do not want that fate. I would like to be Florida dead. When I am able to retire I hope it is in the sunnier south.

But for now, I live here. My book series is set here in a fictional town just south of the stateline, called South Lake, Mississippi. In South Lake, they say they are the sunnier side of Memphis. Yeah.

So, since most of you are not lifers from here, I thought maybe you might be interested in a few Memphis facts:

About the demographics:
The city was founded in 1819 and incorporated in 1826. The airport sits 331 feet above sea level and the Mississippi River (which borders us on the west) sits at 188 feet above sea level. Guess it’s all uphill from the river eastward. The city has 324 square miles, 315 of which is land and the rest is water. Which is to say, we don’t have a lot of lakes. The official city tree is the dogwood, and the official city flower is the crape myrtle. And I don’t understand that because I thought the crape myrtle WAS a tree? January’s average temperature is 41.2 degrees, and July’s average is 81.2 -but hey, since I have lived here, the temps have been below zero in the winter and above 100 in the summer.(Record High: 108 on July 13, 1980 Record Low: -13 on Dec. 24, 1963 )

Annnnnd… the average rainfall in Memphis is over 48 inches. This brings me to my knees when I think about it. That’s a lot of rain. Shelton, Washington, gets 66 inches of rain per year. The US average is 37. Why the heck do we get so much?

Well, that is about all I have for you today. I am still sick, and I am still busting my butt to get formatting finished on the third Shannon Wallace book so I can start rewriting it. This one has to be rewritten (said with clenched teeth). It’s not going to be pretty what I will do to it. But that might have to be another blog post.

My interview with JD Rhoades goes live on Writer Groupie tomorrow so if you like hard-boiled PI stories be sure to heck that out.

I will also be sending out the spring newsletter soon, and there will be FREE DOWNLOAD info in it. Be sure to sign up for it on the sidebar.

Leave your comments below on your home town…what’s the rainfall like there?

Posted in:
Tags: Does it get cold in Memphis?, Interesting facts about Memphis, What kind of weather does Memphis have?, where is Memphis
/ 0 Comments
Subscribe to the Zanies See the sidebar to sign up!
+